Some strange things have happened in Fujian province in eastern China over the years, but perhaps few stranger than a missing cow that recently turned up in the village sewers!

How could this happen? Well, no one seems to know the answer to that but farmer, Sheng Hsueh, spent four days searching for his missing cow and could not imagine what had happened to her.

The cow was discovered in the sewer after locals were perplexed by the sound of mooing that was coming from under the ground. When she popped her head through an open manhole, witnesses realized where she was but couldn’t believe their eyes.

Passersby soothed the animal by feeding her grass until her owner could rescue her via a makeshift winch (mechanical device like a crane), which would haul her back to solid ground.

“She didn’t seem upset by her ordeal. As soon as they cut her free she found a patch of grass and started grazing,” said local. Wang Hsia.

How this happened would be something worth knowing, but the cow, at least so far, isn’t telling.

Maybe cows really do jump over the moon and this one missed her mark?

EMERGENCY SERVICES in the town of Pratteln, Switzerland, had to rescue this donkey after it fell into a manhole. 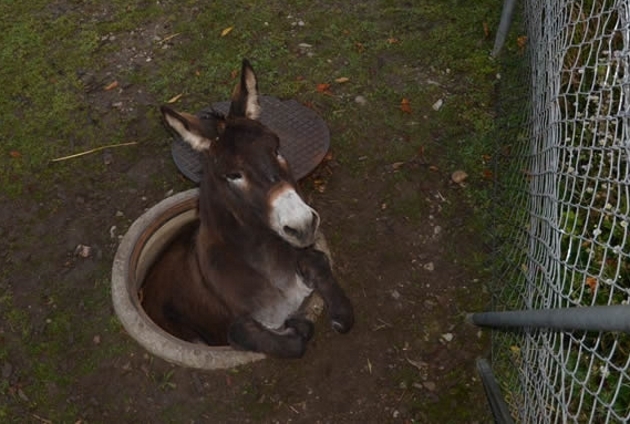 It had somehow got its hind legs about a metre into the shaft, according to local police. The animal was stuck in the hole until a passer-by spotted it at around 8am on Saturday.

A team of firefighters then turned up to rescue the super-unimpressed animal: 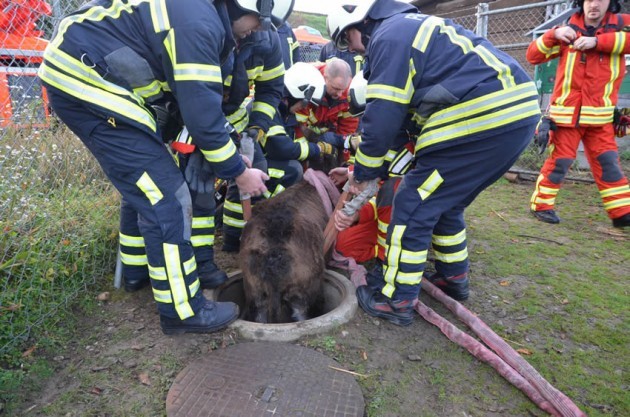 ‘Go on, make an ‘ass hole’ joke and see if I laugh’Source: Basel Landschaft Polizei

It was largely unharmed, and is now, well, fine. And not in a hole.

Police are investigating how it came to fall in.

A 250-pound bear that accidentally trapped itself in a Colorado storm drain made its way out through a manhole.

Colorado Parks and Wildlife officials responded to a call about the animal in west Colorado Springs.

When they arrived, officials opened the manhole and it only took the bear six minutes to figure out how to escape.

Officials fired a non-lethal rubber bullet to hurry the animal out … and the bear took the hint.

“By hazing this bear with non-lethal rubber slugs, @COParksWildlife gave this bear an extra lease on life. If it had been handled and tagged, that would have counted as a strike against the bear. Next time it was handled, it would have had to be euthanized,” Colorado Parks and Wildlife wrote on Twitter.

In a video, the animal can be seen hightailing it out of there.

Officials think the bear, which is believed to be 3 to 4 years old, picked the storm drain because there was an open garbage can nearby that had caught berries from a tree.

Is it a pipe dream? First a boa constrictor gets stuck in a sewer and slithers out through a toilet in a downtown office building. Then a Siberian husky gets wedged in a storm drain in Encanto with only its head and one paw sticking out.

The mystery remains as to how the husky, 1½, got into its predicament. Perhaps the dog had wandered into a drainage culvert and was trying to crawl out through the narrow street curb opening.

Whatever the case, the county Department of Animal Services has started off the new year with some unusual rescues, confirms Deputy Director Daniel DeSousa. What is even eerier is that the husky and the boa both have the same name: “Bella.”

The snake in the sewer call came on Tuesday. On Thursday, someone reported seeing the dog, or at least its head. Two Animal Services officers managed to guide the pooch to a nearby storm drain opening where the grate was removed and she was safely lifted out.

5) Baby elephant gets stuck in a drain

A baby elephant in Sri Lanka has been rescued after getting trapped in a drain.

Wild elephants are known to roam freely in the area in the port city of Hambantota.

Rescuers and wildlife officials broke open the drain and pulled the elephant to safety.

It was then taken away for medical treatment for what vets think might be an injured leg.